The season of love, for most, is in Spring. The fresh new beginnings when life just bloomed. In the Fall, people just wound down the hunt and prepared to stay snuggled next to their loved ones over the winter. Well, for CV… the seasons of the calendar meant very little. This was the end of one chapter and the start of another.

You see, CV was thinking a few steps ahead of her peers. She knew that preparation was the key to success. She was using the summer season for all it was worth. Taking summer session classes may have made for a boring social life, but the prospects of a fine career on the other side made waiting tables less difficult a task to do.

During the limited free time she had, CV spend it dreaming of the life she wanted. For starters, she came from a good home. She had a lot of love and support. As wonderful as that was, it would not last for ever. One day, she would need her own home, her own car, her own family to support. The days of relying on a man for economic prosperity were long gone with her grandparent’s generation.

It would not be fair to ask her boyfriend to support her luxurious tastes. She liked the fancier attires and beautiful makeup kits everyone wanted these days… as well as the fancy house and car. Problem was… with school and work, who had the time to get all dolled up? If one was not studying, one was paying bills, if not working, then attending class or sleeping.

Looking Ahead to Love

Her boyfriend had told her he loved her. CV believed him. He was not one to mix up his words very much. If he said it, he meant it. The man was ready to move forward. The luxury of having graduated a few semester ahead of CV afforded him the hopes to settle down well before she was ready. Not that her heart didn’t want to spend eternity with him.

CV needed a little time to get herself ready first. Love was not cheap, as her girlfriend used to say. One had to support the blossoming romance and invest in it to keep it going. That required money. Money for everything.

Her cousin felt that CV was a bit too pessimistic and money focused, but the reality was simple… without money, love was hard. Being homeless is not easy. Being hungry all the time is not easy. CV was not trying to hear misery after all that hard work to get her degree.

For now, all there was to look ahead to was more savings, more working, more schooling, and more waiting on love. CV’s heart raced whenever she thought of her boyfriend. He was amazing, kind, attentive. His patience worked wonders to keep her motivated. One day, she would be in his arms and they would be in their own place.

Checking her phone, CV was happy to see one of her friends calling. This was the photographer friend who made amazing photos happen all the time. Well, with others anyway. CV had not had the good fortunes of having a proper photo session with this guy. Mostly because their schedules rarely overlapped.

CV was doing evening classes and he was doing morning classes. She worked most days and several nights. He alternated opposite her. Just dumb luck really.

Today, he was off and wanted to do some photos. She was available but not dressed for the part. The stretch of mid-terms had forced CV to skip out on her usual self-care routines that kept her looking her best. If anything, today was not the day to be photographed at all. 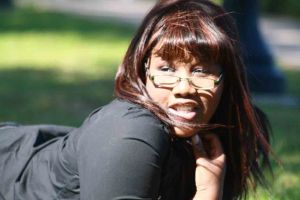 The wind was messing with her hair and she felt tired from all the studying she had done. However, opportunities like this rarely came up for the two of them.

What sold the deal for CV was the photographer’s offer to do a special shoot for her boyfriend. CV could not pass that up. Her man had landed a job a few towns over and couldn’t see her every day. Any special shoot would mean she’d have great photos to send his way to keep him salivating a little. After all, he did send her a bit of poetry to keep her blushing on a regular.

As the conversation wound down, it turned out that they were both close to a park. CV agreed to head straight there for the shoot. No time to go home and change, it would be her comfy outfit. Luckily for her, she had a few accessories in the trunk of her car she could use to bring some color to her ensemble during the shoot.

The photographer had explained that this was going to just be a basic test to understand how she would appear on camera. This was not going to be the photos she was going to send to her man. While that didn’t make too much sense, CV had heard from a few friends that these light tests were the secret to his amazing photos. Kind of like a free trial run where he learned how to adjust his focus to match the personality of the person being photographed.

Whatever worked, CV had a little time and she wanted some artistic photos for her album.