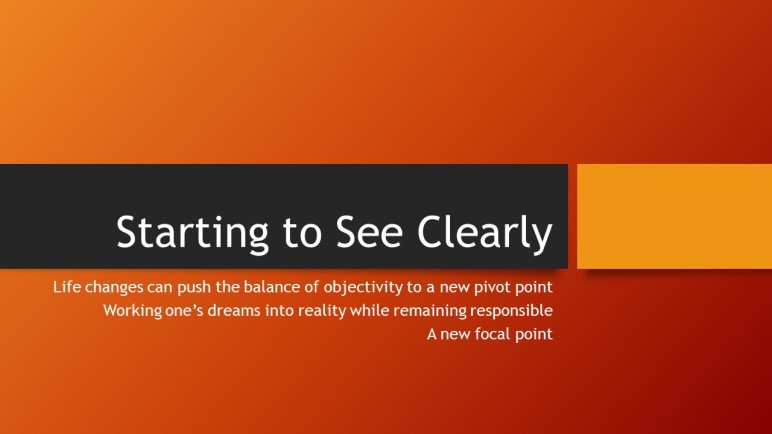 Returning back to normal… however aspirational… is not always optional.
Life changed.
Responsibilities deepened and strengthened.
To pick up a pen or keyboard to write has to be tight.

As in. Intentionally planned rightly around an ever changing schedule.
But. Patience won out. The light is shining bright.
Focus is coming. Clarity is gaining
Yet… type-A means pushing harder than ever.

It’s a question of gaining one’s footing.
Adjusting to the new conditions
Eventually… a new normal will be reached. But first… one needs to see more clearly.
Not in the eyes only way of seeing. But in the mindful, intelligent, emotional, and spiritual sense

It’s one thing to have aspirations and dreams, it’s quite the other to have dependents counting on your ability to materialize your dreams. Fatherhood has changed much of my focus. Trying to create the future they deserve is both a sharpening tool and a vision changing tool

You know what has to be done short term. You’ve got to keep an eye on the long term. And you can’t compromise the medium term. It’s a delicate balancing act that often looks easy. Not that it ever is. But… supermoms have the ability to make it look very easy. As a father in a society that is still trying to figure out how masculinity works… the work of balancing it all is just as difficult as any woman has ever seen. Difference being, we don’t have the same venue to talk about this. (Not saying there’s no venue.. Just not the same one)

What’s gotten clearer, the drive to make my dreams come true faster, smarter, sooner. And bigger. While at the same time… teaching my little ones to never give up on their dreams. Equipping them with knowledge is one thing. Living out the example for them is another… and that’s the clarity that has come with fatherhood.

I’ve got to model for them how one can patiently work to make one’s dream work. Keeping calm and patiently working steadily. It’s the clarity of focus that comes from seeing them look up to you as if you’re their hero.

To that end, the process of getting better at my craft(s) is being fueled by a fire and hunger unlike any other before. Fear has to be dealt with… instead of ignored. Used as a push instead of an anchor.

But here’s the twist… the vision has to expand. With clarity and better focus, one has to look at bigger and better. Set sights higher. Admire greater. Strive for more. That way, you never settle. The children can’t see an example of settling. They have to see an example of growth so they know they can improve from where ever they’re starting.

The past only informed the present. The present is shaping the future. We only have but so much control over our circumstance. We own the entirety of our present, but we don’t control the entirety of it. Think about it. However, the part that’s within our control, let us make the absolute best of it!

Until then, keep your lens in clear focus of what’s important to you. Then, make the necessary adjustments to fuel your journey towards your goals.

This post was build off of the one from social media. Below is the link to the initial post. Have a great awesome rest of day.

“Starting to see clearly” Returning back to normal…however aspirational…is not always optional Life has changed. Responsibilities deepened and strengthened. To pick up a pen or keyboard to write has to be tight As in. Intentionally planned rightly around an ever changing schedule But. Patience won out. The light is shining bright Focus is coming. Clarity is gaining Yet…type-A means pushing harder than ever It’s a question of gaining one’s footing. Adjusting to the new condition Eventually…a new normal will be reached. But first…one needs to see more clearly. Not in the eyes only way of seeing. But in the mindful, intelligent, emotional, and spiritual sense Only then…can visions outside of a comfort zone can come into focus into the lens of your dreams #poetry #musings #ideas This may well one day translate to the blog… #nyc #midtown #skyline Those are my 👓😎 #writersofinstagram #blogger Link in bio wwww.through1lens.com/2018/07/23/seeclearly