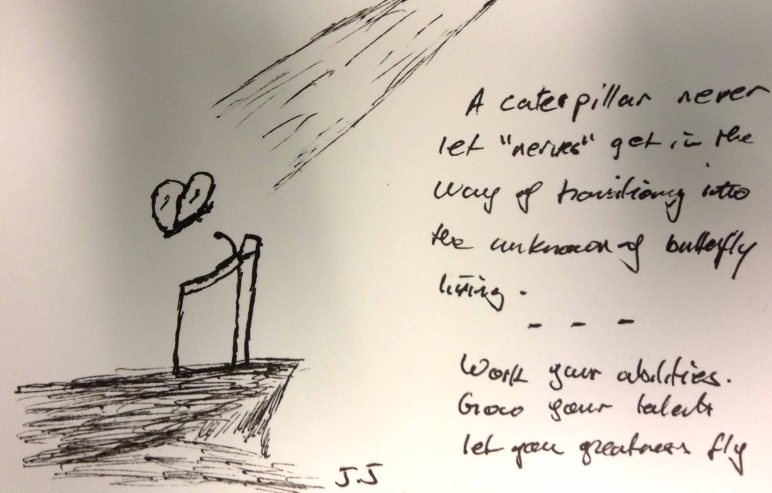 That Moment Before Delivering a Speech

The moments leading up to delivering a speech can bring about feelings of dread, fear, anxiety, excitement, anticipation, elation. This, of course, all depends on the person and their perspective.

What is really going one there? How come some folks feel near panic and others near jubilee when facing an audience?

A point of fact

The way the body responds is rather simple.

OK, not that simple. The concept is, but the actual response is highly complex

Fight or Flight is what the simple concept is.

The body knows when it has to rev up to face challenges. Not going into all the science here today

That rev up lets loose adrenaline and many other chemicals to get your body ready to fight or fly out of that situation you’re in.

The body isn’t very concerned with the what/why so much as keeping itself alive and well.

Today, we don’t face lions and bears in the streets, but the body doesn’t know that. So, it reacts the same to all novelties that could be threats.

Why then for one it’s fear and the other it’s excitement?

Your mind is such a powerful tool. Such a powerful processor that it often colors experiences and places them into categories. So, a surprise birthday party will jack up your adrenaline in order to run from that surprise and your brain quickly steps in… and categorizes it as a safe wonderful joyous moment. You experience surprise and glee from the surprise of love from your fellow humans.

One can get so surprised the old heart can’t handle it. That’s where the phrase scared to death may have originated from. Too much load on the heart and it gives up. While you won’t hear things like pleasantly scared to death, you’ll hear about an unexpected and unfortunate heart attack during a retirement party instead.