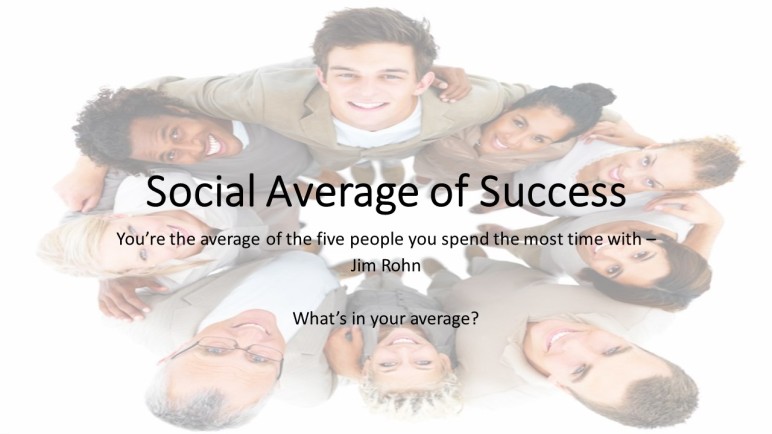 This week’s motivational Monday is all about considerations for who you know and what influence they have on you. There is a popular phrase coined by Jim Rohn that states we are the average of the five people closest to us.

In light of the fact there is also a phrase that says birds of a feather flock together, it is easy to understand how the average of success has a social component to it.

It’s a simple availability bias that many of us take for granted. We are really good at being the average of the five people closest to us. It’s normal. It’s an adaptive trait. It allows us to get along. It keeps us from constantly having to watch our backs about every single human we meet.

This is one of the reasons why most people from a given locality have similar political views. This is why many tend to go to similar sporting events. This is why certain areas of a country have a certain diet compared to other areas. Same goes for the top students in class and the types of careers people often aspire to.

The social average, however, does not have to be accidental. It can be intentional. We can actually shape and mold our circle of friends. In fact, we do that all the time. We’re not in touch with every single friend from primary school through now in adulthood. Yet, there are some friendships that have stood the test of time.

Last week, we spoke about working in silence. The social average of success happens to have it’s greatest influence during the moments of silent work.

Let’s dissect this a bit.

First, just because one is working silently towards their goals does not mean one is working in complete isolation towards said goal. If one is, please reconsider. Total isolation is not a great thing for social creatures like humans.

When working in silence, one is not advertising to the world everything one is doing. What such a one is doing is being smart and selective about who to trust for input about ideas affecting the work.

In plain language… when I plan to build a boat (I am not) I will not post it on Facebook all the time about the hope and dream and desire to build a boat. I may make a comment here or there but I will not invest a lot of time in speaking about this boat building just for the sake of feeling good about sharing that.

By having the right influence shaping my choices, I have a greater chance of actually building my boat within budget and allowed time.

If we’re not watchful about who we allow to influence us, we are likely to be pushed in a direction that won’t suit our life’s purpose.

In the boat building example, if I only spoke to friends who never built a boat, let alone love boating, my information may not be very useful. Many dreams have ended prematurely because of improper influence.

Thankfully, we all can have a say in the type of circle we have. It won’t be a complete say. Not everyone can up and leave to find a new circle. Not every circle is open to having a newbie join. However, one can branch out and improve the types of people we know.

If one is into boating, find and become friends with those who enjoy boating. Don’t trash all your past friends though because life is not just about boating.

Same can be said for romance, careers, religion, recreation, education, child care, and many more.

Like relationships, friendships take time to build. One will impose some influence and will be influenced. We can not expect to so influence five that their impact on us is less than ours on them. The average favors them influencing you more than you influencing them.

This whole month has touched on goals in some capacity or the other. Today is no different. To make new year’s resolutions work, one has to have the right people helping out. That work needs support. That’s why support groups often outperform solo efforts.

This week, the encouragement is to be mindful and purposeful about who you allow to influence your thoughts and decisions. Not everyone needs to know the plans and goals. Just enough of the right folks to help you move forward.

Keep in mind, having opposing views and dissenting voices help inform the choices made. Do not exclude people from your friend list just because you don’t like their political lean. One can learn a lot from diversity of views.

It’s the values that have to be aligned. Values like… competence… or… trustworthiness… or… hands on parenting. When people share common values, they can support one another keep those values. Even if the ideology or methodology is a bit different. It’s the differences that offer the greatest learning and the similitudes that keeps the averages up and progress going.

This week, make a bit of time to be purposeful about who we share our dreams with, who we socialize with, who we call friends, and who we allow to influence the success of our goals.

Stack the deck in your favor. Your read this blog post… that’s one person. Now, find the other four that will help you move your goals forward. For the social average of success is highly influenced by the people closest to you.

note… this blog post glossed over the layers of friendships that one has… glossed over how different goals will bring in/out different people into that close five. All influenced by you… and your purpose