Many years ago, on a road trip to learn more about being an entrepreneur, the lens of the camera were brought into focus on the beauty of the sun.

Of course, the sun being as bright as it is, taking amazing images of the sun is more a science mixed with art than just aiming at the sun. One has to be very careful not to burn or damage one’s eyes.

In the days of these photos, thinking of the mood the sun created was significant. Without adequate sunlight, many living creatures on this planet do not fair well. Ranging from plants not thriving to humans having their moods altered, the scope of inadequate sunlight is massive and the implications life altering.

Capturing the reflection of the sun

In the early days, it was all about placing sunglasses on, aiming the camera in the general direction of the sun, and taking the photo. One would hope the camera did all the computations correctly and gave you a great photo. Sadly, that’s not always the case.

The camera will do all kinds of adjustments, but something has to give. The dynamic range of the camera is significantly less than the human eye, let alone the brain.

Get the camera focused and metered off the surroundings and the sun looks like a super bright white spot… or may even blow out the whole photo. Get the metering right on the sun and it looks a wonderful yellow with everything else darkened to the point of being blacked out.

Of course, that makes for some amazing artistic renderings, but the objective of this trip was to capture the natural effect of a good sunset, sunrise, and sunny day.

Given the skills back then, the results were more a mixture of luck than art.

Over several memory card worth of images, it became clear that the shots that would be worth sharing were those where the sun was reflecting off a surface.

Nothing reflects sunlight quite like glass and water. This would then become the focus of the shoots during the journey. An unexpected advantage, polarized sunglasses work wonders when dealing with reflected sunlight. It was a lot easier to look through the view finder to frame the photo (please… do not look directly at the sun through the view finder… even with polarized sunglasses). 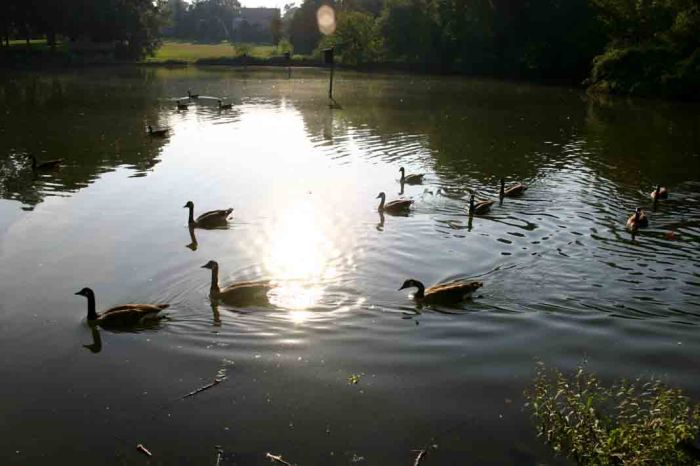 Once the image was properly framed, it was just a matter of shifting over enough to have the sun show in the frame and clicking the shutter. It took a few tries before getting the hang of this. Soon, sunlight bouncing of water and mirrors started to give results.

Getting a good image of the sun reflecting off a body of water is not as easy as it appears. The reflection can be quite intense at key times of the day. Even when looking safely away, the angle of the reflected sun was intense. Those images were rushed a bit more just for the sake of protecting the eyes.

For the record, there are some sunglasses on the market that will help you do sunlight photos… just not recommending any on this blog… so folks don’t go trying it and hurt their eyes because they got the cheaper less effective version.

At one point, trying to capture the way the sun reflected about and around some storm clouds proved to be very fun. However, the results were very disappointing. Clearly, the skills available back then were lacking. It’s possible to do these today, but living in a concrete jungle changes the way one has access to good sun lit storm clouds. 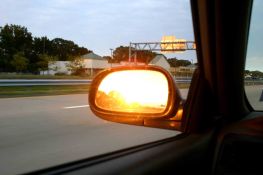 Most of these images were photographed while traveling on a long road trip. Some towns seem to have better access to storms than others… and some have more dramatic weather patterns that lend themselves to amazing photos. This photographer blogger is happy to live in a more temperate place… with regards to some types of storms. The other types of storms we get, prevents the temptation of taking photos… safety being first and foremost.

No laws were broken in taking these images. Links, of course, will be provided below. This is critical to note, because it is never recommended to take photos while driving. Several of the shared images appear to suggest driving was taking place at the time of taking the image. That’s not the case. The car was driven by a good friend who was safety focused.

Which brings another point. When taking images that suggest one is driving… it does require the ability to hold a camera very steady and dropping one’s head out of sight before taking the image. Getting the prefect angle so the camera stays out of sight is another feat in and of itself.

Where it made sense, the car was not in motion. When the car was in motion, it was usually in low traffic (or no traffic) areas… and many takes were done to find one with no blurring.

These points come from the fact the shoot was done years ago with less experience than today. If they had to be done today, additional precautions would have been taken to minimize the amount of time spent snapping while the friend was driving. After all, one does not want to distract a driver very much. It goes without saying… don’t try this at home either.

The experiment was a success. The photos taught a lot of lessons. The one that didn’t get much attention was the use of a timer and a tripod. Great for capturing the sun very low over the horizon. Of course, done in a place where the risk of theft is very low… and one is close enough to keep an eye on one’s gear.

Knowing what time the sun was going to set, and setting the timer, got some really cool shots of the sun right on the horizon. This avoided the need to look over the horizon with sunglasses wondering just how close one was to getting the shot. Granted, there is an element of luck at play, but it worked. A few extra snaps were made after the timer went off, for good measure.

The advantage of this approach… one can look over the horizon before the sun arrives to that point, minimizing the risk to the eyes, and getting the perfect angle. Then, wait patiently. This was done while waiting in a hotel parking lot during the road trip. You’ll see the result in the gallery.

The idea of framing the photo has crossed my mind… who knows… might do it one day.

Until we speak again about photography, keep your lens safely aimed and your eyes well protected, as you reflect on any sunlight that makes you smile.

Below will be a list of posts that relate to the topic of the sun. Images, musings, poetry, etc… whenever the inspiration strikes.

Lessons about taking pix of the sun

Of course…when I wrote the blog post, it was not this succinctly lolhttps://t.co/np7eADSl53 #writerslife